The Story of the Hermit 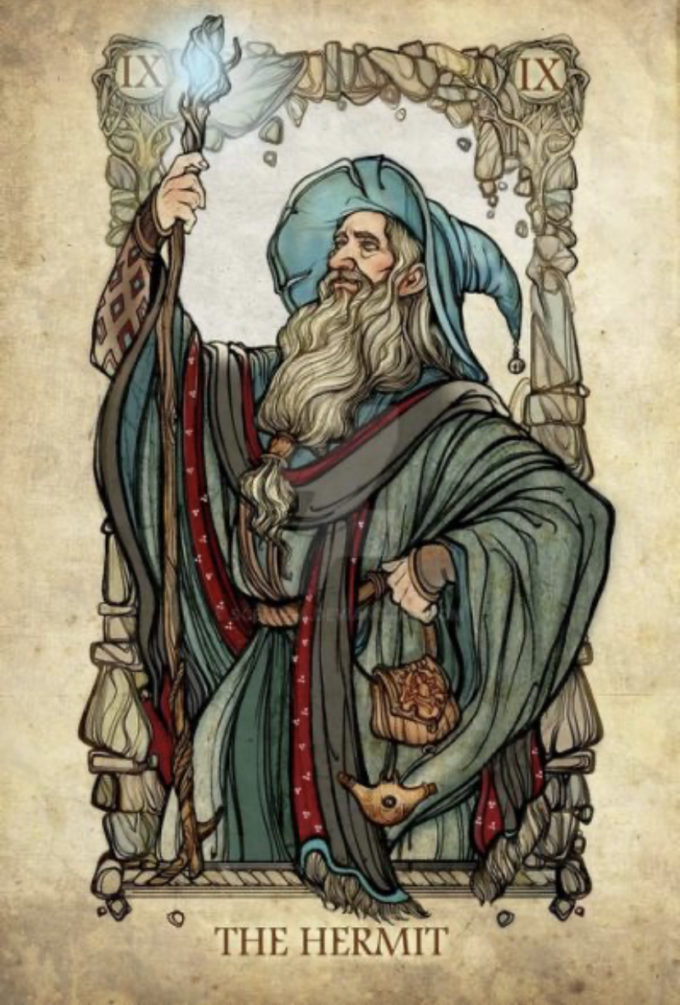 A robed man or monk carrying a lantern, sometimes in hand, sometimes hanging off a staff. A barren landscape.

After a long and busy lifetime, building, creating, loving, hating, fighting, compromising, failing, succeeding, the Fool feels a profound need to retreat. In a small, rustic home deep in the woods, he hides, reading, cleaning, organizing, resting or just thinking. But every night at dusk he heads out, traveling across the bare, autumnal landscape. He carries only a staff and a lantern.

It is during these restless walks from dusk till dawn, peering at and examining whatever takes his fancy, that he sees things he’s missed during his lifetime. His lantern illuminates animals and insects that only come out at night, flowers and plants that only bloom by moon or star light.

As these secret corners of the world are illuminated and explored by him, he feels that he is also illuminating hidden areas of his mind. In a way, he has become the Fool again. As in the beginning, he goes wherever inspiration leads him. Back then, however, his staff rested on his shoulder, carrying unseen his pack. The Fool was like the pack: wrapped up, unknown. The Hermit’s staff leans out before him now, not behind. And it carries a lantern, not a pack. The Hermit is like the lantern, illuminated from within by all he is, capable of penetrating the darkness.

Represented by Virgo, the Hermit is a card of introspection, analysis and, well, virginity. This is not a time for socializing; the card indicates, instead, a desire for peace and solitude. Nor is it a time for action, discussion or decisions. It is a time to think, organize, ruminate, and take stock. There may be feelings of frustration and discontent during this time of withdrawal. But such times lead to enlightenment, illumination, clarity.

In regards to people, the Hermit can represents a wise, inspirational person, friend, teacher or therapist, someone the querent usually sees alone, someone the rest of the querent’s friends and family may not know about. This is a person who can shine a light on things that were previously mysterious and confusing. They will help the querent understand themselves or find what it is they are seeking.

Thirteen’s Observations on the Hermit

One of the important things about this card is that the Hermit is almost always shown on the move. He’s never hiding away in his cave. Rather, he’s out wandering, searching. This is apt for the restless mind of a Virgo, always gathering information, analyzing, making connections. Virgos are also known for being the skeptics of the zodiac. If anyone is going to stick a lantern into a dark place and take a good look at what’s going on, it’s a Virgo.

Combined with a desire to just “be alone,” the Hermit indicates a feeling of impatience with people. The querent might be sensitive to having his/her peace disturbed, or express disdain for those who can’t see what they’re seeing (“Are you blind?” might be their refrain, or, more typically, “You just don’t get it, and I can’t explain it to you.”). They’re likely to be grumpy and anti-social.

For the querent, however, this is a special time. Like an artist who hides away for days then emerges to paint a masterpiece, this quiet time allows all the pieces to fall into place. Their minds are alive, and they can see things they weren’t able to see before. So go ahead and encourage them to take late night drives, long walks, hide in their room or go on retreat for a month. When they come back, they’ll have a new understanding of the world, of their lives, and of themselves. It’ll be the best thing for them, and for everyone else.