More about the significance of the painting, crystals and the 2 Great Energetic Openings:

1. The intersecting points on the top of the skull between the Coronal and Sagital Sutures and

2. The Perineum, Located between the legs.

NOTE: Anatomical references are how the powers that are want them to be describe as and not as ” chakras or energy centers”, explaining that they are not the same.

Both areas contain a Diamond Shape

These 2 areas were significant in the clearing, opening, healing and Activation during this session.

In the months leading up to Dec, 31st were you experiencing any of the following:

Subtle vibrations,, slight rumblings or pulsations in the lower extremities and perineum areas? For me they felt like little tremor, almost like the after shock rumblings of an earth quake, but extremely faint, but noticeable. I started to notice them about 6 months ago. I just thought that something may be going on with my circulation.

In theMonth of December: Did you experience any severe headaches, almost migraine in nature. At first they might have come and gone but as we neared the end of the month, did they become more frequent, last longer and more intense?

Again, me personally, I just thought I might have been dehydrated or sleep deprived ( which is understandable with the holiday busyness and and so on )

What I found interesting is that as soon as the year officially ended and the healing was completed, I have not experienced anymore lower extremity rumblings and I noticed that the headaches pretty much went away, except when I got too involved in someone else’s story….. When I allow the transfer of someone else’s blocks and releases become my own somehow. I realized that in order to prevent this from happening, I must recognize when someone just needs to speak and be heard and as for myself- to just be quiet, but remain momentarily empathetic but not directly involved or engaged.

I realized that these rumblings and headaches were the symptoms of energetic blockages occurring in these 2 areas, preventing the flow of energy outward, clogging up the spaces withinthese areas and preventing the smooth flow for the merging of the colors to circulate properly and thus preventing our vessel ( which is the body )not being able to support this circulation or the higher vibration.

The 2 crystals: Rhodochrosite and Sugilite, as I am guided to explain, are what we need to utilized at both of these anatomical diamond shaped areas to help. Rhodochrosite is to be placed at the Perineum and Sugilite at the Coronal/Sagital intersecting areas. Also Clear Quartz crystals are to be laid along the front of the body, along the path of the column of light ( spine ) in a splayed out fashion. See the picture below. It was not clear as to how many, So I am thinking you should use as many as needed according to the size of your torso. For me, I will probably use 4 or 5; 3-4 inch points. The pointed end should be facing outward and each point should be staggered.

Both of these crystals are not cheap nor easy to find in good quality at an affordable price. But it is recommended that they are acquired. DO not buy them from china. You will most likely receive Purpilite in place of Sugilite and Rose Quartz in place of Rhodochrosite. Buy from a reputable seller. In utilizing crystals on the body, as a general rule, bigger is always better.

The only advice I can personally give to you, is let your intuition lead the way.

When not utilizing the crystals on the body, print the image of the painting – whatever size is available for you to print it and lay the crystals out in the same way. See picture below.

As far as the physical body is concerned; The Crystal quartz are to be laid out atop of the body, along either side of the mid line as pictured, Sugilite above and touching the Suture interception point and Rhodochrosite, between the legs, lightly touching the perineum areas. I placed the quartz crystals ( because I had different 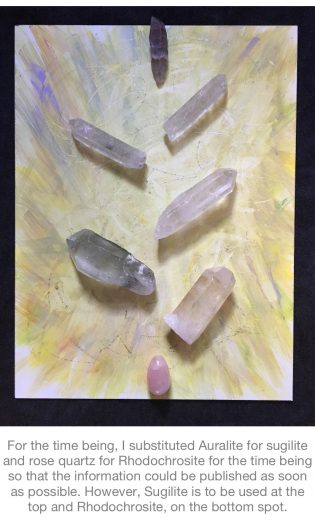 sizes ) with the largest ones on the lower aspects of the body to smaller as I worked upward- for comfort and area space reasons only.