The Energy of Aries 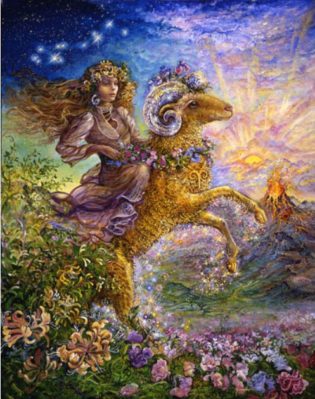 Symbol: The Ram’s Horns
Keyword: I AM ,  Element: Fire
Quality: Cardinal/Masculine or Positive ( Masculine signs are Positive; Feminine signs are Negative. )
As a positive, cardinal energy, ARIES is interested in crisis, activity, and what is going on.

Rays: 1st Ray of Will/Power AND 7th Ray of Ceremonial Order & Magic
Stone: Diamond
Life Pursuit: The thrill of the moment
Vibration: Enthusiastic
Secret Desire: To lead the way for others.
Basic Soul Purposes: To establish a separate identity; to be a “birthplace of ideas.” Quality to Overcome: Anger Lesson to Learn: Love Motivated by: Their inspirations & aspirations

As the Sun moves into Aries, its daily path crosses the equator and begins to move into the northern hemisphere. For most inhabited regions of the world this is the beginning of spring; the days become longer than the nights, and plants and animals burst into activity.
Aries is the wake-up call of the zodiac. In ancient times the spring equinox marked the start of the New Year and festivities were held to honor the birth of new life and the new beginnings that lay in store. The Ram became celebrated in the associated stars as a sacred symbol of resurrection, since its fleece, when shorn, continues to grow and provides a constant, abundant supply.

Its origin is Egyptian and derives from their practice of sacrificing the sacred ram to the Sun at the spring equinox, to ensure his return and secure a successful year ahead. Christian customs still reflect this New Year worship, for Easter – the rising of the Lord – is always held in the week after the full Moon that follows the Sun’s entry into this sign; and eggs are given as a symbol of new life and new opportunities.

Astrology is based on the belief that anything that emerges into physical being at any moment in time will share the spiritual qualities of that moment in time.

Those born when the Sun is in Aries do so when the Sun is ‘exalted’ in astrological terms, since its return to the point of the zodiac where daylight begins to overcome the dark, is seen as the sun-god regaining his power and rising victorious to take control. Although ruled by the planet Mars, Aries has much to do with the solar qualities of creativity, energy, enthusiasm and courage. The Sun is the symbol of consciousness, individuality, clear direction and definition – the power of the will to rise above instinct and take control. Those born when the Sun is strong in the chart, as it is here in the sign of Aries, appreciate honesty and truth, hate deceit, and need things to be clearly expressed in an obvious, logical manner. Subtle undertones and delicate suggestions mean nothing to them; their greatness is to bring clarity and openness; their weakness is their limited capacity to ‘feel’ what you are talking about and their lack of sensitivity to those who expect them to read their minds.

In addition to this solar quality, Aries resonates to the energy of its planetary ruler, Mars, recognized as the bringer of action and the impulse to attack or strike back. Mars is the defiant spirit; when dignified it will show courage, fearlessness, respected leadership, the propensity to take a risk and the lover of a challenge. In this form Mars is the moral champion, ready to take up arms on behalf of others less able or willing to put their necks on the line. When poorly placed and displaying its less noble traits, it represents needless aggression, violent eruptions, assertiveness to the point of selfishness, and the urge to take from others without due regard to their needs and well being. No astrologer can know from the sun-sign alone whether those born under this sign display the highest or lowest facets of its planetary ruler, but certainly they will be characterized by great energy and readiness for action, with impulsiveness and competitiveness marking their actions for good or bad.

The overall gift of the fire signs is creative inspiration, evolving into an endless supply of bright ideas and contagious enthusiasm. When the fire is lit, ie., when they are motivated by a cause, they simply blaze with energy and ideas and become so consumed by their passions that everyone around them feels drawn into the flame. But fire consumes, and ultimately those energy levels will drop, particularly if the Aries proclivity for instant action is not matched by the reality of instant results. Unless other factors in the chart bestow the needed discipline and perseverance, Arians can struggle to keep a sense of balance and are prone to suffering from nervous, emotional or physical ‘burn out’, refusing to recognize their limits or respect their bodily needs.

If Your Ascendant sign is in Aries: ( Be sure to check your chart to see what your Ascendant is. )
The zodiac energy on the ASCENDANT is the energy that the public beholds. We also look at the world through our ASCENDANT energy. ARIES ASCENDANT, on the mundane level, sees a world that needs to be conquered and dominated.

In esoteric (soul-centered) astrology, the ASCENDANT indicates the soul’s purpose in physical embodiment. ARIES ASCENDANT reveals that the soul is to be activated through the 1st & 7th RAYS. Thus, the soul has incarnated in order to take on the responsibility of a leadership role. It’s 1st RAY lessons include learning how to surrender the personal will to Divine Will and to structure and implement power in ways that are beneficial to the Whole. Personal power is to be lifted to knowledge of Self as a channel for Divine Power.

ARIES ASCENDANT is to evolve from the totally subjective approach to the objective, impersonal use of the 1st RAY’s Will/Power. The main function and goal of ARIES ASCENDANT’s 7th RAY energy is to fuse matter with Spirit. ARIES, the “birthplace of ideas,” is to bring spiritual ideas into physical manifestation. ARIES ASCENDANT is to use the leadership role to change those forms, both physical and mental, that no longer serve the Divine Plan. Ceremony and ritual are important to the 7th RAY individual. THE HOUSE IN WHICH MERCURY—AS THE SOUL LEVEL RULER OF ARIES—IS FOUND will indicate the area of life’s experiences where the lessons of the 1st and 7th RAYS will tend to manifest. Since MERCURY CHANNELS THE 4TH RAY OF HARMONY THROUGH CONFLICT, many of the lessons will come through efforts to establish harmony out of conflict within the area of life’s experiences indicated by the house location of Mercury.

If your MOON IN ARIES
( Be sure to check your chart and see where your Moon is located. ) The MOON reveals the personality as it is displayed in our reactions to the events within our daily lives. It also reveals much that is hidden within our subconscious minds.

On the soul-centered level, the MOON reveals habit patterns that must be overcome or transformed into the positive expression in order to advance toward spiritual maturity. This struggle to overcome the negative tendencies revealed by the MOON is the “cross” we bear (Alan Oken). The MOON reminds us of the negative habit patterns formed in prior incarnations that created the karma we brought into this incarnation.

MOON IN ARIES indicates that soul growth will occur as the individual learns control of the emotions by the mind. MOON IN ARIES learns to move from an instinctual, impulsive reaction to life’s situations to a conscious, more objective response. MOON IN ARIES is to overcome temper outbursts, to channel anger into constructive avenues of expression, to cooperate with others, and to make the shift from aggression to positive self-assertion. MOON IN ARIES’ tendencies are: to be “bossy” and domineering, to be thoughtless of others. ARIES is to allow the restless energy that agitates self and others to be transformed. MOON IN ARIES is to learn how to constructively channel the intensity of its energy.

THE FOLLOWING APPLIES TO ALL THREE OF THE ABOVE – SUN, ASCENDANT, OR MOON IN ARIES:

HEALTH & WELL BEING: The ARIES/LIBRA POLARITIES work together to bring about a positive regulation of energy flow within the physical body. Achieving a balance between the qualities of ARIES & LIBRA, thereby transforming negative habit patterns, will assist in maintaining good health. For examples, achieving a balance between:
ARIES’ aggression – and – LIBRA’s capacity to cooperate.
ARIES’ tendency to dominate – and – LIBRA’s tendency to be too submissive.
ARIES’ impulsiveness – and – LIBRA’s social refinement.
ARIES’ love of activity – and – LIBRA’s ability to be lazy, to relax and smell the flowers, and to appreciate the beauty in sound, color, form, thought, and nature.
ARIES’ love of working with tools – and – LIBRA’s love of all forms of art.
Failure to recharge one’s Sun sign energy results in depletion, irritability, and increased vulnerability to physical and emotional dis-eases. The element of one’s Sun sign is the fuel needed to feel alive. It is the source of vitality and power, the resource for coping with stress and challenges.

ARIES recharges by: 1) Vigorous physical activity in the sunlight; 2) Involvement with other fire signs—Leo and Sagittarius; 3) Involvement in promotional type work based on inspired ideas and goals.
ARIES deprived of regular vigorous physical activity in the sunlight will begin to feel depleted and depressed. Fire is spontaneous energy that moves quickly. To stifle fire energy is to literally put it out.

CONFLICT RESOLUTION: Confronted with conflict, ARIES will attempt to overpower the obstacles, to burn them up or scare them away by a show of force. Tactfulness is rare for ARIES.
He/she responds with intensity and favors direct action in problem-solving. Impulse, rather than deliberation, is most likely.

Other Aspects of Aries:
Direction: East
Anatomy: The head and face
Illnesses: Arien illnesses are those affecting the head and face, including tooth-ache, headaches, migraines, hare-lips, boils generally and skin-eruptions, marks and pimples in the face. Through its rulership by Mars, Aries can often indicate burns or scars.
Colors: Hot, fiery or burnt colors. Red in particular.
Stones & Metals: Stones and metals fall under the rulership of planets, not signs, but through its association with Mars, Aries has affinity with bloodstone, jasper, and vermilion.